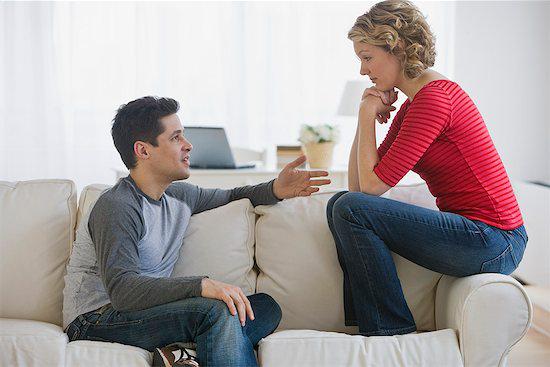 “There are 5 main arenas of conflict found in most marriages: sex, children, in-laws, finances, and communication.  Which of these 5 do you see as your primary source of conflict?”

I’ve asked this question hundreds of times to both men and women in pastoral marriage counseling.  Can you guess what 95% of women say is the biggest problem in their relationship?  Nope, not sex.  That #1 response belongs to the other person in the room.

The biggest complaint I see from women in marriage counseling is that they can’t seem to get their husbands to communicate.

This post is less about how to speak with your husband when something terrible occurs and more about how to develop a communicative relationship so that when something terrible does occur you both can actually sit down, talk, and plan a path forward.  This post will teach you how to develop him into a communicative partner.  Yep, that’s right.  I put the responsibility of his communication skills, or lack thereof, directly on you.

So, how can a woman turn her Silent Sam into a Chatty Chuck?

Be Strategic in Time & Location

Wait until he is deeply engrossed in the news, game, or paper – then jump in and demand his full attention.  Better yet, wait until he gets home late from work, immediately accuse him of being inconsiderate, and then broach the topic you want to discuss.  Though this doesn’t seem to be a winning strategy I’m shocked how many women still attempt utilize this uninspired method of seduction.

Instead, consider the Esther approach who knew the power of intrigue, timing, and location.  She needed to speak with her husband about something that was literally world changing.  Instead of simply blurting out her thoughts in a moment of panic and excitement she strategically invited her husband to a special dinner where she would finally give her request.  Guess what?  It worked!

Do you make it a priority to plan weekly and monthly conversation spots with your husband?  Places that are conducive to a man talking?

Few things are more painful for a man than talking with a woman who is being overly dramatic, excessively angry, or extremely cold.  You know how to be charming.  Otherwise, he never would have married you in the first place.  So, turn up the charm and eventually he’ll be talking with you like your early days of dating.

Don’t be naïve about the importance of sexual satisfaction.  The way to a man’s heart is NOT through his stomach.  Whoever stated this missed the marked by a good 6 inches.  I’m sorry if this makes you blush but a woman who knows this truth will have the knowledge necessary to build a stronger relationship.  The pathway to emotional intimacy with a man is through sexual intimacy.

Human beings truly are funny creatures.  We desire to communicate so strongly that we end up damaging our communication through improper listening.  Here is how it works.  While he is expressing his thoughts through word, she is actively thinking through her thoughts internally.  When its her time to speak he simply retreats into his inner thoughts preparing his next statement instead of listening to her words.  This is not proper communication.  Instead, stop talking and truly listen to what he is saying.

Talk about His Interests

Men love to talk about themselves.  He is the hero of his own story.  He would love to have someone interested enough in his story to talk with him about it.  Seriously, I believe this is the most neglected point in this entire post.  The most successful couples I know in the area of friendship and communication are those who have wives who make strong efforts become i

Okay, the stereotype is true.  Men have enormous egos.  We need positive feedback in order to press forward in our lives.  As a man, I want to know that others admire me, appreciate me, and value my contributions to society.  I am naturally drawn to those who validate my contributions and seem to like me.  If a man thinks that a woman doesn’t like him – then he’s not going to talk much with her.  Why should he?  Does he really want to get criticized, again?  One thing that has always attracted me to Heather is that she thinks I’m awesome.  It’s true!  She thinks I’m good-looking, a powerful communicator, a fantastic father, a good leader, and a devoted follower of Jesus.  Here’s the thing, I know that I’m not as great as she thinks I am – but this fact pulls me to her even more!

Healthy communication lives in the questions we ask.  I spend hours every week sitting across from men who I don’t know.  These are men who are seeking counseling, just arriving at our church, or wanting to grow as a Christian.  I get it!  Men, in general, are not as naturally communicative as woman.  However, I’ve learned that if I ask strategic questions, men will begin to open up and communicate.  Instead of diving into a 15-minute monologue about eschatological timetables that would likely only interest me, I start asking about their lives, interests, beliefs, and fears. I don’t pretend to be interested in order to get to my statements, I genuinely become interested.  The vast majority of my conversations with men are questions from me and answers from them.  This keeps them talking.

One of these steps alone will only help nudge open the door to deeper communication in a marriage, but when a woman begins to build one upon the other she will develop a man who is ready and willing to talk.

Look for my follow-up post written to men: HELP! My Wife is Falling Apart!

The Idea Talks podcast is BACK!!! »